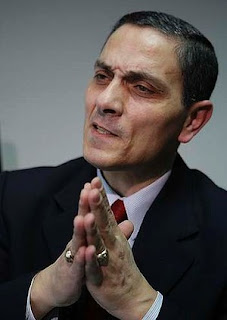 Richard Ammar Chichakli, the Syrian-American accountant believed by many law enforcement agencies to have been the primary money launderer and partner of Viktor Bout, has been arrested in Melbourne, Australia. Chichakli  is a Federal fugitive and a co-defendant with Bout, in a case separate from the one in which the "Lord of War" has already been convicted, and is serving a 25-year sentence. Chichakli and Bout operated a network of aircraft companies that illegally shipped arms to conflict zones, often in violation of international sanctions.

In an unusual turn of events, Chichakli was identified when he began screening to apply for as position as a Protective Service Officer (PSO), which is an armed, uniformed police officer position with the Australian Federal Police.  PSOs provide security at a number of government installations, as well as at foreign embassies.He reportedly applied under the name of Jehad Almustafa. It is unknown whether he was applying for the position to facilitate the commission of further crimes, or for access to restricted law enforcement information. An individual with the same name has a footprint in the UAE.

The charges pending in the United States,* which involve his attempts to secure aircraft  for convicted war criminal Charles Taylor are:

Chichakli, the son and nephew of senior Syrian military and civilian leaders, and who served in the US Army, worked with Bout in Sharjah, in the United Arab Emirates. At one time he maintained an accounting office in the United States. Though his precise role in Bout's arms trafficking enterprise has never been made public, and he has denied violating the law, he is thought to have been the financial component of a partnership that sold and delivered illegal weapons shipments, to insurgents fighting in the civil wars of Africa and Asia.

Mr. Bout cannot be tried in this case, though he is a named defendant, due to a principle of American law that prohibits him from jeopardy in any US case other than the one which he was extradited for. The question in the minds of many observers is whether Chichakli will divulge heretofore unknown details of Bout's work for US intelligence services, which could prove extremely embarrassing for those agencies who engaged his services, knowing that he was smuggling arms illegally, at the same time.