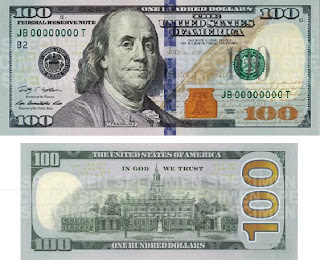 A substantial portion of a shipment of the new design US $100 notes, which is scheduled for release sometime in 2013, was stolen in October, whilst en route from Philadelphia Airport to a destination in New Jersey. The nature of the crime would indicate organised crime may have been involved.Though I have not seen any other  reports of thefts of the one hundred, as law enforcement might believe that such information may have been deemed too sensitive to release, as there is obviously a pending investigation, one should assume that there have been, or will be, others.

Since these new and improved bills will, of course, be passed by any counterfeit detection machine, skillful cash couriers might be able to move them into busy banks, contained within bundled currency. When examined individually, though, the differences become apparent. I have displayed the note here for your information. Watch for these bills, as the identity of the depositors could assist the investigators.
Posted by Kenneth Rijock at Tuesday, January 08, 2013