If you are not a close observer of what is currently happening in Venezuela,  you may have missed the recent completion of that country's intermediate-range ballistic missile base. Located on the Paraguaná Peninsula, and built with the assistance of a contractor associated with the Iranian Revolutionary Guard Corps (IRGC), the base is now fully operational.

Reports of its construction, in 2010 and 2011, which were detailed by the Venezuelan Opposition, as well as many respected Venezuelan expats, were soundly denied by the Chavez Government, and discounted by the United States intelligence community. Now that the missile base is a reality, with Miami, and even Washington DC, within the range of missiles that have reportedly been made available to Venezuela by Iran, one wonders if Iranian threats regarding its ability to conduct attacks upon the Continental United States, if Iran's nuclear facilities are attacked, can be carried out.
Perhaps those intelligence analysts in Washington who were so busy saying that a missile base under construction in Venezuela was pure fiction would like to move down here to Miami, where I wonder whether any of the old Cold War bomb shelters are still available. Unfortunately, this is merely the latest in a long series of American intelligence failures regarding Venezuela, since oil politics seems to always trump emerging threats, when it comes to America's "head-in-the-sand" foreign policy towards Venezuela. 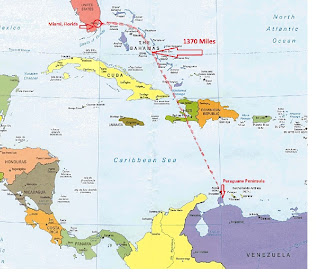