VIKTOR BOUT'S ATTORNEY MAKES THE DEADLINE ON THE BRIEF 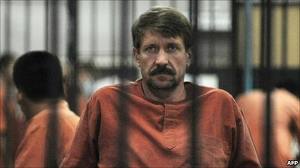 Notwithstanding that his client obviously did not have an opportunity to proofread the Appellate Brief, Albert Dayan, who is handling Viktor Bout's appeal of his District Court conviction, did make the deadline set by the Second Circuit Court of Appeals. Yesterday, on the final day, he filed the Brief and Appendix.

You will recall that Mr. Dayan asked for additional extension on the Brief, but the Court failed to rule. Apparently he went ahead and filed on the last day. At least we will now be able to review the issues, and the appeal will not be dismissed for procedural reasons.

We shall be analysing the issues raised in a future article.
Posted by Kenneth Rijock at Thursday, January 31, 2013