The Chief Judge of US District Court in Miami has entered a order denying an unusual motion, filed by a billion dollar Ponzi schemer, to recuse all of the Federal Judges sitting in South Florida, and thus prevent then from trying his criminal case*. To quote the order, "After carefully considering the statutory standards, the Court concludes that the motion for judicial disqualification and recusal should be denied."
Joel Steinger, accused of orchestrating a $1.25bn life settlement company, but which was in reality a sophisticated Ponzi scheme, alleged that all the judges should be disqualified because ophthalmologist Alan Mendelsohn, who was involved illegal political fundraising, solicited significant campaign contributions from Steinger, in order to fix a pending Florida criminal investigation against him. Mendelsohn told Steinger that the son of a sitting Federal Judge, and the former US Attorney from Miami, were both involved in a corrupt conspiracy to obstruct justice. Mendelsohn was a Republican fundraiser, lobbyist, and adviser to former Florida Governor Charlie Crist. He claimed to be acting on behalf of powerful individuals in government. 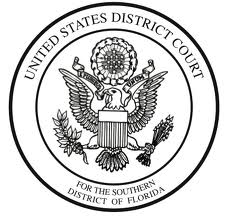