Immediately thereafter the cessation of hostilities between Gaza and Israel, Hamas announced that it was forming a Ministry of War. Note that it is not being called the Ministry of Defence. Rhetoric aside, such an action obviously announces Hamas' intention to plan for, and initiate, yet another military action. If Western investors, and major financial institutions, do not take this as a clear sign to stay out of Gaza, they will reduce their exposure to a point where it is so small that they can walk away from it at any time, and absorb what will only be an insignificant loss. There's nothing like war, and rumours of war, to scare off investment capital, brick-and-mortar bank offices, and loans to the area soon to come under fire.

More recently, it held a press conference, with a large number of children present, where for the first time it disclosed plans to open a military academy in Gaza, which would award degrees in military affairs to graduates.  The programme, which is designed for youths 12-14 years, is intended to create a new generation of children who think that they are soldiers, but are in reality terrorists, and the Hamas leadership haas called upon them to conquer the land "from the [Mediterranean] Sea to the River [Jordan]. 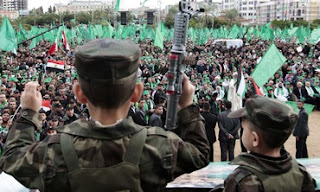 If you haven't already classified the Palestinian Territory of Gaza as representing an unacceptable level of risk for Country Risk purposes, you have not been paying attention. There is no upside to any financial exposure in a jurisdiction that has become a failed state, before it even became a state.

With the new Israeli capability in missile defence, when Hamas draws first blood again, and precipitates yet another conflict, the counterattacks could destroy what little brights spots in the Gazan economy and infrastructure still exist, creating yet more poverty, and the endless cycle of violence. The Hamas leadership is pushing the population of Gaza headfirst off a cliff.