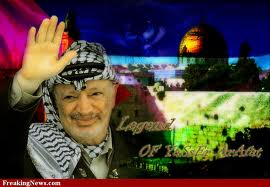 Was he poisoned with a radioactive substance, and who did it ? The news that teams from France and Switzerland, under the authority of his widow, and the Palestinian Authority respectively, will open investigation into the circumstances surrounding the unexplained death of former PLO leader, Yasser Arafat, may end up exposing the Pandora's Box of massive, systemic corruption that existed in the Palestinian territories, under Arafat's regime.

Arafat, who reputedly amassed an illicit fortune in excess of $1bn during his lifetime*, was known to allow his subordinates to engage in corruption, so long as they remained loyal to him. Persistent rumours have circulated, since his death on 2004, that the guilty party or parties acted because they were being denied access to money donated to the PA, but diverted by Arafat.  Reliable sources have stated that Arafat had the last word on all such funds, and that he may have cut off certain PEPs for political purposes, as they posed a threat to his continued dominance of the PA.


From a compliance viewpoint, I am hoping that these investigations shed some light on those corrupt Palestinian PEPs who has heretofore remained in the shadows. Since corrupt PEPs who steal funds from their own country, or take bribes and kickbacks for steering contracts to favoured clients, often secrete their ill-gotten gains overseas, the identification of these PEPs would assist compliance officers at international banks in avoiding any relationship with these criminals. They have been stealing from their own, impoverished people, and one day their misdeeds will be exposed. You do not want to be known as their banker when it all comes out in court.