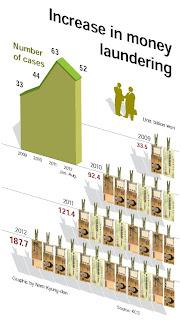 The Customs Service of Korea has released statistics on money laundering by Korean nationals outside the Republic of Korea, which has been on the rise recently. Money laundering, according to the government customs agency, has gone from 33 cases, in 2009, to 44 cases in 2010, to 52 cases in the first eight months of this year. 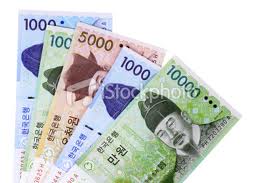 According to its statistics, 80% of Korean overseas laundering activity is taking place in the United States. There is no information proffered, other than the graph pictured above.

According to its records, $168m was laundered in the US this year, between January and August. In Korean Won, that is 187.7bn . Inasmuch as there have not been any notable money laundering cases in US District Courts since 2009 involving Korean nationals or expats, this raises the question: where is Korea getting its information, and is it accurate ?

if there has indeed been a rapid increase in successful money laundering, involving Koreans nationals, it raises these questions:

(1) Is it Organised Crime activity ?

(2) Is the money criminal proceeds from Korea that is being laundered, and subsequently invested, in the United States ?

(3) Is it criminal proceeds earned in the USA that is being laundered ? Is it being repatriated to Korea ?

Assuming that there is at least some truth to these allegations, bank compliance officers, in an overabundance of caution, should review all their large Korean trading accounts, charitable organisations that specialise in donating money to Korean recipients, and look carefully at wire transfer records, going back at least one year, to ensure that you are not, unwittingly, laundering criminal proceeds for Korean criminals.