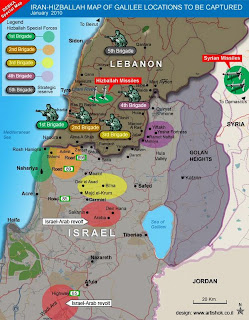 With the increasing possibility that there may be an armed conflict in the near future, between Iran on one hand, and Israel and/or the United States on the other hand, it is important to remember Hezbollah's repeated threats to attack Israel, in the event that war breaks out. For that reason, those readers who have not seen the graphic depiction of the operational plan of Hezbollah, which first appeared in 2010, should examine it at this time, in connection with their possible reassessment of Country Risk for Israel, when and if hostilities ensue at the Lebanon-Israel frontier, in 2012 or 2013.

The map is a pictorial representation of captured Hezbollah war plans, and it depicts the invasion and capture of a substantial segment of Galilee. Risk managers whose banks, or bank customers, have financial exposure in the region should govern themselves accordingly. This is not to say that an invasion is imminent, but to detail the war plans of Israel's adversary, Hezbollah.