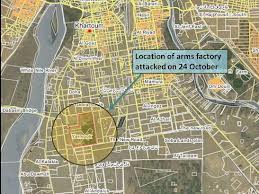 There were massive explosions at the the Yarmouk Arms Factory, in the Al-Shagara Industrial Complex, in Khartoum, Sudan, this week. It is estimated that 60% of the facility is completely destroyed, the rest being partially destroyed. There are two confirmed dead on the scene. Who was responsible ?

Yarmouk manufactures arms and ammunition, and it is believed to be under contract to the Government of Iran. Arms and ammunition flow from Sudan, through Egypt, and into the Palestinian Territory of Gaza, which is administered by Hamas. Many observers are of the opinion that Gaza was the ultimate destination for Yarmouk's output.

There is no clear-cut evidence regarding how the attack ocurred. The Government of Sudan alleges that four aircraft sent from Israel bombed the facility, but no proof has been made public. Was it sabotage, or a missile attack, and who was involved ? Israel or the United States may have been involved. Israel has attacked Sudanese convoys containing arms destined for Gaza in the past, and there is a report that the radars as Khartoum Airport were disabled prior to the explosions.
The United States, in an abundance of caution, closed its embassy in Khartoum, when protesters appeared, casting blame for the incident upon the West. 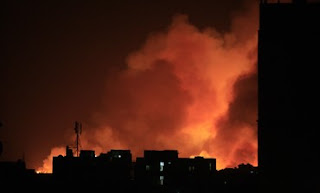