An unmanned aerial drone, believed by Israel to be under Hezbollah control, coming in from the Mediterranean, overflew The Palestinian Territory of Gaza, and then crossed into Southern Israel yesterday. It was shot down by Israeli Air Force fighters shortly thereafter. It was an unarmed UAV, meaning that it was probably used for surveillance purposes.

A ground search is in progress for the wreckage; the Negev Desert is relatively uninhabited, save for the  nuclear facility at Dimona but the intended target of UAV is unknown. It is suspected by most observers to be of Iranian manufacture, but more advanced than previous UAVs that have entered Israel in the past. 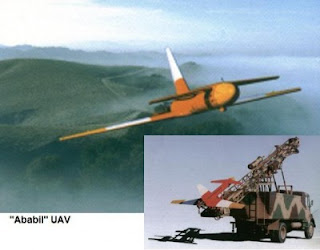 Today, Israeli fighter jets, in obvious response, entered Lebanese airspace, and flew over a number of towns and villages in Southern Lebanon, the area controlled by Hezbollah. These events are disturbing, for the Hezbollah overflight may represent increased intelligence-gathering activities, in advance of possible Hezbollah or Iranian action. Risk levels have now increased for Lebanon, and Country Risk may be further increased as a result.