NOTE TO READERS: THIS ARTICLE, WHICH DISCUSSES ISSUES FROM TESTIMONY THE PUBLICATION OF WHICH  IS BARRED TO RESIDENTS OF THE REPUBLIC OF MALTA, IS FOR INTERNATIONAL READERS ONLY. RESIDENTS OF MALTA ARE ADVISED TO IMMEDIATELY LEAVE THIS WEBSITE, TO REFRAIN FROM ACCESSING THE BLOG ARTICLE WHERE INFORMATION CONTAINED THEREIN IS PROHIBITED TO THEM BY COURT ORDER, AND TO REFRAIN FROM LISTENING TO THE AUDIO SEGMENT.

IT IS STRONGLY SUGGESTED THAT READERS WHO WISH TO VIEW THAT ARTICLE DISABLE OR TURN OFF THE AUDIO COMPLETELY, AS THE DIALOGUE CONTAINS EXTREMELY OFFENSIVE PROFANITY WHICH YOU MAY FIND OFFENSIVE. 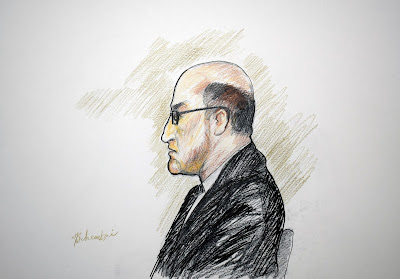 Notwithstanding my prior warning that the article was expressly for non-Malta readers, a Maltese blogger decided to write about it.

Simon Mercieca has, on his blog, offered a theory to the effect that the testimony of Melvin Theuma, a recording of which appeared on this blog, with English subtitles, is not credible. His article, we wish to warn our readers, which republished, verbatim, our translation, contained a statement by Johann Cremona, confirming to Theuma " there are another two others [middlemen] like you and you know them both !"

Mercieca has volunteered the opinion that Theuma was not credible, meaning that we are not to believe his statements, for any purpose, based upon his reading that Theuma previously testified that only Fenech was the mastermind, yet he here is discussing the fact that two others exist. His article, which is entitled "Why is Melvin Theuma's testimony not credible, " should be dismissed,  not be taken at face value, for the following reasons:

(1) Mercieca is himself not credible. whether as a journalist or for any other purpose, for he is a known paid supporter of Yorgen Fenach, and therefore his theories cannot be considered objective, as he obviously has a hidden agenda: to discredit Theuma as a witness, to discredit Daphne's attorneys, to show that YF is a victim, to invent & sow doubts in the investigation, and to assassinate the character of Daphne's attorneys.

(2)  His blog, which was set up on the second anniversary of Daphne's murder,  largely spews out attacks on Daphne's family. Again, he is not objective in his postings.

(3) The voice recording is widely suspected to have been leaked by Fenech's defence team. Was this their aim, to have someone comment upon the testimony, and then swoop in to discredit it by reason of inconsistent statements ? We believe this to be true.

(4) Mercieca's article is part of a "Reasonable Doubt" toxic narrative campaign designed to discredit Theuma as a witness, because his testimony is critical to establish a successful case against Fenech.

Without Theuma, there are only the three organized crime thugs, and we will probably never get to the unnamed additional middlemen/masterminds. Mercieca, who is in Contempt of Court for publishing information in violation of a previous court order in another case, is trying to use this blog for malevolent aims.

In truth and in fact, Theuma's testimony confirms that there are more parties involved, and the public demands to know who they are. It does confirm that YF was involved, and Mercieca is attempting to destroy Theuma as a witness.  Don't be taken in; disinformation and misinformation are his methods, but they have utterly failed. Theuma is believable.