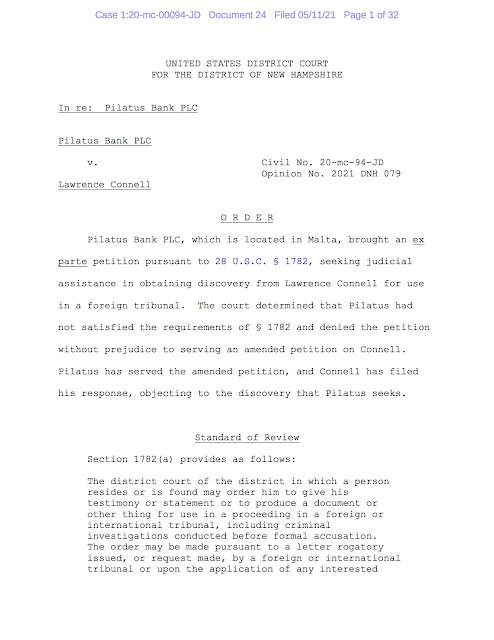 A District Judge in New Hampshire has put an end to Pilatus Bank owner Ali Sadr Hashi Nejad's attempt to secure Discovery from Lawrence Connell, the former Competent Person (Administrator) in charge of winding down Pilatus, after the European Central Bank cancelled its banking license.

Pilatus, which claimed that the evidence it sought to obtain from Connell would assist it in reinstating its operating license, and in a potential civil suit against the ECB for damages, failed to satisfy the statutory requirements to obtain Discovery. In a 32-page opinion, the Court detailed the deficiencies in Pilatus' Amended Petition, most of which it previously enumerated in the order responding to the original Petition. You can find its treatment of those issues in an article which previously appeared in this Blog, entitled Is Pilatus Bank Petition a backhanded way to Obtain Discovery in Expected Miami or Malta Criminal Case ?

Regular readers of our running commentary on this unusual case know that we have been extremely critical of the way the case was managed by Pilatus counsel, due to obvious fact that the bank's arguments in the Petition, and the Amended Petition, failed to show that it was entitled to the requested relief .

Now that the case is closed, Malta's Police, who have unofficially stated that they were not bringing any criminal charges against the Pilatus Bank officers and directors for money laundering, so long as the US case was pending, no longer have that as as excuse; they must now act, or be exposed as corrupt, and under the influence of the same individuals that they are required to arrest and charge. We trust that the appropriate pressure will now be exerted by the people of Malta against their elected officials, to see that justice is done regzrding Pilatus Bank's money launderers.

a final note; The Order dismissing the case ruled that costs incurred by the Respondent, Lawrence Connell, will be taxed against the bank. This means that Pilatus must pay Connell's costs in the case. 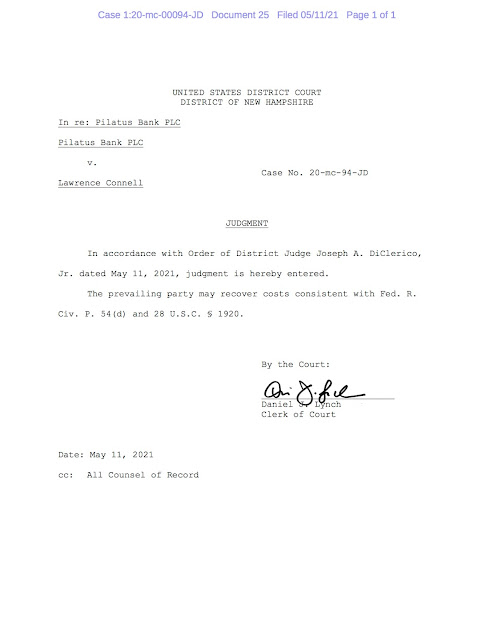