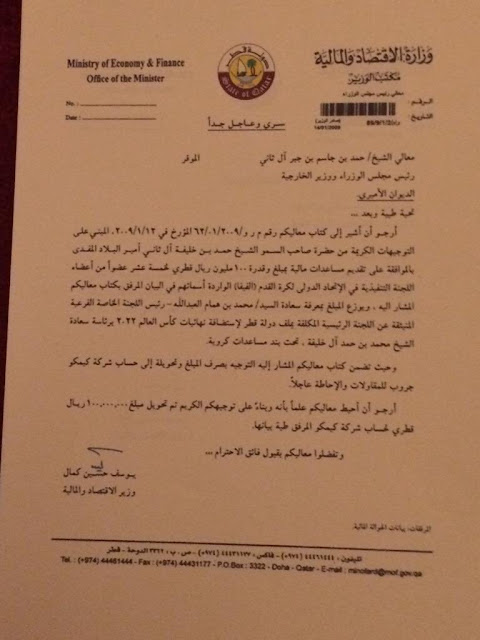 An Order of Payment, appearing to be from the Government of Qatar, specifying the payment of one hundred Million Qatari Rials (approximately USD$27.75m) to fifteen FIFA officials, has again stirred up the controversy over the global football scandal. As newly discovered evidence, it may ultimately be considered the proverbial "Smoking Gun" in the FIFA bribery scandal, implicating Qatar.

Here is an accurate translation;

"I would like to inform you about the letter Number MRW 2009/01/62 , dated 12/02/2009, based upon the recommendations of  His Excellency Sheikh Hamad Bin Khalifa Al Thani, the revered Prince of the Country, to donate money of one hundred million Qatari Rials, for fifteen members of the FIFA Executive Committee, whose names are listed on the Annex. The sum will be paid under the control of Mr. Mohammed Bin Hamman Abdallah, Chairman of the specific committee in charge of the follow-up of Qatar's bid to host the 2022 World Cup Finals.

This letter includes instructions for the transfer of this sum to the account of Kemko Group (contracts, services and business)as a matter of urgency.

I would like to inform you that according to your instructions, the sum of 100 million Qatari Rials was transferred to the account of the aforementioned company Kemko."

The above document was delivered to the Anti-corruption Police of France, and Swiss authorities, this week, and is scheduled to be made public today in Europe. We also expect that US authorities have circulated it to the appropriate recipients in the Federal case in SDNY, which is on appeal to the 2nd Circuit.

The names in the Annex shall be released in the near future; stay tuned.