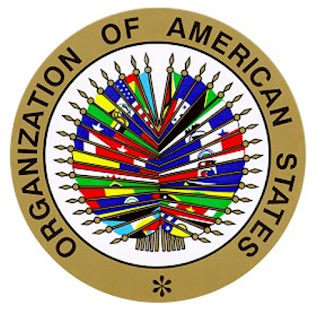 The OAS, whose members designate all the independent states of the Western Hemisphere, named HAMAS, the radical Palestinian organization, a terrorist entity , on May 17, 2021.

Here is the complete text of the OAS Statement:

The recent attacks launched by Hamas against the Israeli civilian population undoubtedly constitute attacks of a terrorist nature. Their violence and the objectives they pursue clearly have this characteristic.

Hamas' terrorist aggression is unlimited and alway seeks civilian victims, seeks to escalate conflict dynamics and armed actions, as well as sowing terror among innocent populations, be they Israeli or Palestinian.

The immoral and unworthy use of children and women as human shields, as well as the militarization of residential areas, constitute in themselves acts that deserve the most absolute  repudiation and condemnation.

The initiation of attacks of this nature against a country wit a clear terrorist objective of its civilian population makes the invocation of the principal of legitimate defense by Israel essential.

The Hamas attacks constitute an attack against the peace and security of Israel and the region, and make it imperative to categorize Hamas as a Terrorist organization for the General Secretariat of the Organization of American States.