MALTA; CAUGHT BETWEEN A ROCK AND A HARD PLACE WITH ITS MUSCAT DILEMMA 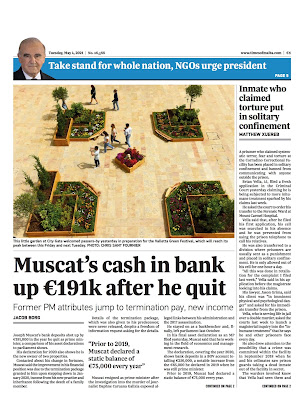 What is Malta's Prime Minister, Robert Abela, to do ? The evidence against his predecessor,  the disgraced Joseph Muscat, is piling up, and there will be public pressure to do something, anything, to show leadership. The problem is, Abela is facing a Hobson's Choice. If Muscat is charged, he could be next, as reformers circumvent him entirely, and engineer what would amount to a palace coup, but having him arrested, and forcing his resignation.

On the other hand, if he delays further, he AND Muscat could both be charged by the US and/or UK. Finally, since he was Muscat's legal adviser, before becoming PM, he himself might be charged if Muscat is charged abroad, and cooperates against him. he's got a real problem, to be sure.  Everybody in Valletta should be studying the Foreign Corrupt Practices Act (FCPA) and the Bribery Act, but we doubt that they are yet.

(1) Rumour has it additional individuals in PL have obtained immunity from prosecution, in exchange for their testimony overseas. Obviously, he will be named in there with JM.

(2) Is a foreign law enforcement agency delivering evidence to Maltese authorities, to push it into bring criminal charges against a number of government officials for corruption and money laundering crimes.

Will Malta therefore charge Muscat, simply to keep him from being tried abroad, and implicating the bulk of the Labour leadership, to keep from spending the next decade in prison.That's most likely his best move, but the Dear Leader surely won't appreciate it.

A final note: remember what happens in Malta when somebody with the ability to expose those in power is arrested ? It never ends well.