AFTER 7 YEARS OF INTENTIONAL DELAYS, DOMINICA'S CORRUPTION CASE IS SET FOR TRIAL 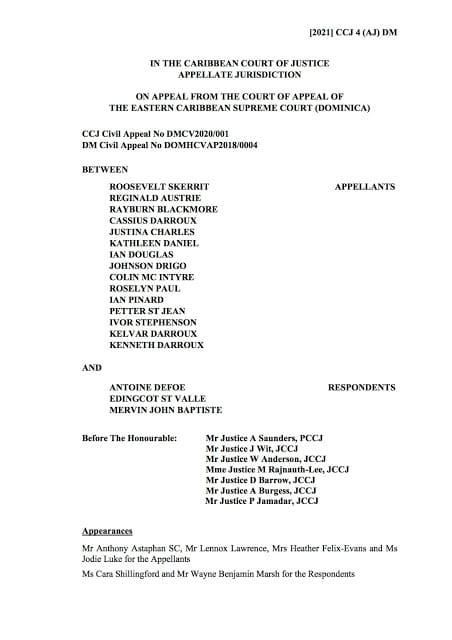 How do you tell the difference between a true democracy and a state where one party violates the Rule of law daily ? It's the amount of time that it takes for a criminal case, affecting the ruling elite, to get to trial,  that is if it ever does. In Malta, Antigua, and many other countries with autocratic regimes, the people in power intentionally delay justice, hoping that the complainants will die off, the Statute of Limitations will run out, the evidence will disappear, or the people will simply forget about the case. Justice Delayed indefinitely is Justice Denied.

Down in the Commonwealth of Dominica, after seven long years of delay after delay, appeal after appeal, and a final slap on the writs from a high regional court NOT located in Dominica, the ruling regime's leaders have finally been required to enter pleas to the corruption charges, and the case has been, at long last, set for trial on July 8, 2021. The defendants are the country's greedy leader, Roosevelt Skerritt, and most of his associates in government; gypsies, tramps and thieves, all of them.

Of course, due to the  unconscionable delays, al engineered by the regime, one complainant has died, and another forced to withdraw due to threats made against his family. Whether the case actually goes to trial is questionable, as some sort of delay will manifest itself; it always does. There's no justice in Dominica, just the East Caribbean version of what happens whenever the Rule of Law is perverted by corrupt leaders.