A TIMELESS PARABLE FOR THE AGES 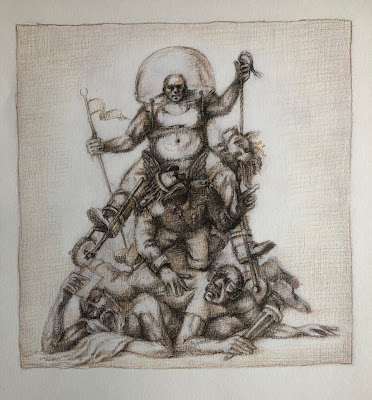 I am the Lizard King; I can do anything by COSIMO

Once Upon a Time, there was an evil Mob Boss. He was constantly receiving tribute from his many crews, in the way of kickbacks from their illicit ventures. He also was demanding, and accepting, bribes from businesses that wanted to operate within his territory. He feared the Tax Man, so he cast about for a suitable scheme to launder the proceeds of these crimes .

His wife, known unofficially as the Godmother, had a close friend in a legitimate retail business that catered to upscale customers, and whose products were priced accordingly, and they hatched a plot to launder the criminal proceeds through that company, with her friend's willing cooperation.

Soon, the company was reporting record sales, at top prices. In truth and in fact, the mob boss' dirty money was being placed into the business, and booked in as sales. A cooperating manufacturer on the mainland submitted dummy receipts, showing shipment of substantial inventory, to cover the phantom sales. In time,  due to pressure from the manufacturer, in time some of those inventory were actually shipped, and paid for at inflated prices, to compensate the company for its cooperation in the scheme.

Due to the company's seemingly meteoric success, it was decided that the legitimate company would enter into a ambitious countrywide expansion programme. New branches were built all over the country, and the costs deferred, as the  dirty money coming in covered all the expenses, once it had been comingled with the small amount of legitimate retail sales.

The operators of the legitimate business, who has been compensating the mob boss through disguised payments in a subsidiary business, were asked to greatly increase their payments to him, so they began issuing corporate indebtedness, in the way of unsecured bonds, to the local investing public, at very attractive interest rates. Given the company's ostensible amazing profits, there was no problem selling the bonds, first in a single issue, and later in several subsequent issues.The company was now highly leveraged, but so long as the dirty money flowed in, the mob boss was paid, and the now substantial debt service was covered.

One year, there was a Perfect Storm of negative events; an epidemic hit the region, and retail sales dropped off dramatically, due to an economic slowdown. There could no longer be dummy sales in high volume, as there was little or no foot traffic into the stores, which were now spread all over the nation. Overhead soared.

Additionally due to arrests, investigations, and law enforcement exposure of many of the illicit ventures,  the mob boss' revenues plunged to next to nothing. He leaned even further upon the bond sales to cover his astronomical life style and expense payments (bribes) to government officials.

The retail company was forced to declare major losses, which caused the bond holders, who feared for the loss of their principal, to sell off their holdings, which  drove down the market value of the bonds, and increased the interest rate payable on the bonds. Debt increased exponentially, with no way to repay it.

The company was forced to file for bankruptcy, exposing the laundering scheme to outside auditors hired by the court to wind up the company. The operators of the company, knowing that their testimony could result in the mob boss going to prison for the rest of his life, tried to flee the country, but they were arrested and charged. Both died of suspected suicide in prison, before their trial, although it was suspected that the suicides were staged.

Someone sent in an anonymous advert to the local papers; it said only: For the Wages of Sin is Death. Romans 6:23.