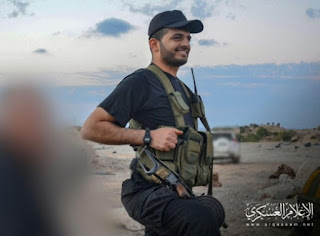 Readers who may have had reservations about the circumstances surrounding the termination of Hamas senior money launderer Hamed Ahmed Abd al-Khoudary, know that Hamas itself admitted that he held the rank of Commander, in its military-terrorist wing, the Izz al-Din Qassam Brigades. His rank was disclosed on May 5, 2019 on Hamas-controlled media. Look at the official photograph above, showing him in uniform, if you still think he was a civilian.

Al-Khoudary, according to a public statement made by the Israel Defense Forces, operated two currency exchanges, both of which had been designated as terrorist organizations in 2018 by the State of Israel. He commanded a platoon of Hamas terrorists. He was the individual who funded both Hamas and the PIJ, using money supplied by Iran.

A final note; al-Khoudary had two money service businesses overseas, one in Europe, and one in Canada; he was a global terrorist financier, providing desperately needed funding, after employing money laundering tactics, as an intermediary between Iran and the two Gaza terrorist organizations. He represented a clear and present danger to the Western democracies seeking to suppress global terrorist financing.
Posted by Kenneth Rijock at Friday, May 10, 2019