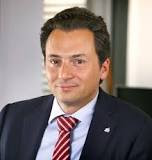 Former PEMEX Chief Executive Emilio Lozoya Austin is wanted in a major money laundering investigation in Mexico. Lozoya allegedly received a $10m bribe in the Odebrecht scandal.  An INTERPOL Red Notice (arrest warrant) has been issued against Lozoya. No formal charges have yet been filed.

The maximum penalty under Mexican law is fifteen years. Lozoya was previously a close aide to former Mexican president Enrique Peña Nieto.
Posted by Kenneth Rijock at Thursday, May 30, 2019