When Donald Trump graduated from college in the summer of 1968, the Selective Service was drafting military-age males for the Vietnam War. We all know the story, from Michael Cohen, about how Trump's father got a Podiatrist who was a tenant in one of his buildings to say he had bone spurs on his feet, so that he could evade serving his country.

At first, Trump lied and said he received a high Draft Lottery number, but that program did exist until December 1969, so he then admitted that his deferment was achieved due to a physician's note. Michael Cohen repeatedly asked Trump to produce that information, but Trump never showed it to him. The doctor's children said recently he did that as a favor to Trump's father, not as a medical opinion. The doctor reportedly received favorable rent contracts for years after that.

the records show Trump, finished with his student deferments, receiving a 1-S status, which meant that he could only be called to serve during a national emergency or a time of  war, neither of which
was declared by Congress during the Vietnam era. later, he received a 4-F deferment, which means totally unfit for service. Enlarge the document to see Trump's Selective Service history. He can be found under Line Number 580. 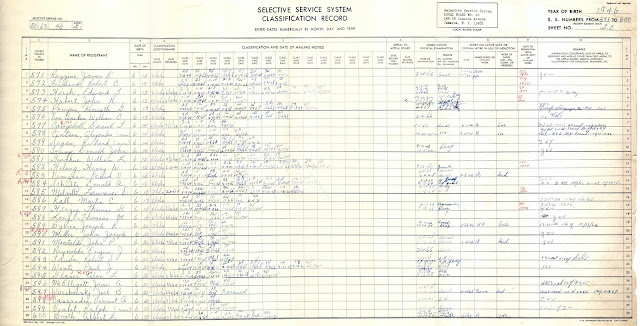