POLICE IN DOMINICA TO GET TANKS FROM CHINA; WILL STATE OF EMERGENCY BE DECLARED TO CANCEL UPCOMING ELECTIONS ?

If you have not seen the video being circulated on the Internet, it shows heavily armed paramilitary police, dressed in camouflage battledress uniforms, arriving at a peaceful Opposition election rally in the East Caribbean state of Dominica recently. They were carrying assault rifles, obviously to intimidate the attendees, all of whom were unarmed.

China reportedly has shipped tanks to the Commonwealth of Dominica Police, to supplement the armored cars it previously received. Local Opposition leaders and activists openly fear that an incident will be created at a future gathering, and that thereafter Dominica's Prime Minister, Roosevelt Skerrit, will declare a State of Emergency, and cancel upcoming national elections. 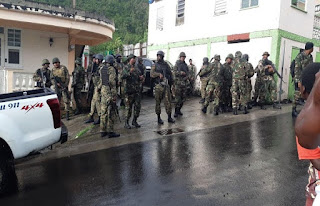 The existence of a State of Emergency could result in the arrest of Opposition leaders, as well as their supporters, and they could be imprisoned without trial. It could also involve the seizure of assets and property, including media outlets that have exposed official corruption, as well as the detention of journalists. Compliance officers whose clients are dealing with financial institutions in Dominica should presume that the current government will then be in total control of local bank compliance procedures, and efforts to place or launder the proceeds of corruption will occur without any AML interference.
Posted by Kenneth Rijock at Wednesday, May 22, 2019