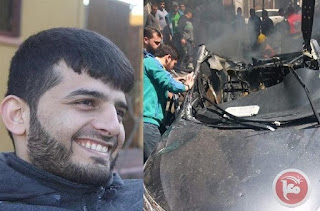 Hamed Ahmed Khudari, a Palestinian terrorist financier who is reportedly the principal individual responsible for transferring funds from Iran to Hamas and the Palestinian Islamic Jihad in the Gaza Strip,was killed this week when his motor vehicle was attacked by Israeli military forces operating in Gaza. Khudari, who was killed in a targeted assassination, was said to be a significant factor in the transfer of funds from Iran to designated terrorist organizations conducting rocket attacks upon civilians this week, which resulted in multiple civilian injuries and deaths.

Khudari operated a money service business known as Hamed llasrapa//Alupak, which was sanctioned by Israel as a terrorist organization in June 2018. The only country which is engaged in killing money launderers is the Peoples' Republic of China; this military action may be an indicator that Israel, which has very specific Rules of Engagement for its military, now considers terrorist financiers to represent an existential threat to the country.
Posted by Kenneth Rijock at Monday, May 06, 2019