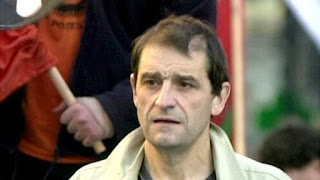 Josu Ternera, the longtime leader of ETA, the Spanish Basque terrorist group, was arrested in a joint-Franc-Spanish law enforcement operation, in Sallanches, which is in the French Alps, near the Swiss and Italian borders. he had reportedly been living near Mont Blanc. Ternera faces a number of pending terrorist cases involving killings by ETA.

Ternera has been a fugitive since 2002, when he failed to appear before a court in Spain.