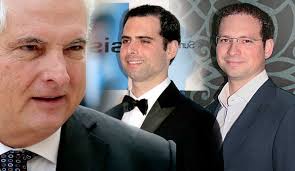 The government agency known as ICE has appealed the $1m bond for each, set by US Immigration Judge Adam Opaciuch, in the deportation case of Luis and Ricardo Martinelli, the sons of former Panamanian President Ricardo Martinelli, who now awaits an imminent trial in Panama City. The sons are alleged to have received over $47m as bribes and kickbacks, on behalf of their father.

The case has drawn the attention of legal observers due to a number of unusual factors:

(1) The Martinelli sons both have pending asylum petitions, but were taken into custody. Why hasn't the US ruled on those petitions, one way or the other ?
(2) The sons have lived in Miami for more than a year since their US visas were cancelled,
without incident or arrest. Why now ?
(3) It is significant that their father's trial is next week.
(4) Ricardo and Luis Martinelli are accused of accepting $47m for their father, but where is the actual evidence that they received the bribe payments, as alleged by anti-corruption prosecutors in Panama ?

The next immigration hearing has been scheduled for December 27, 2018, also at the Krome Detention Center, the facility where the sons are being held.