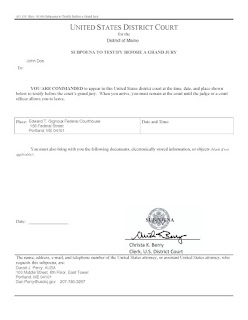 Having been ordered to comply with a subpoena in the Russia probe, and then lost its case in the DC Court of Appeals, the government-controlled foreign corporation objecting to disclosure has gone to the court of last resort, the United States Supreme Court. We still do not know the identity of the corporation, how service was effectuated upon it, which law firms represent it, and the specific local secrecy laws that it has interposed in a failed effort to avoid disclosure.

We do know that the company in question is acting like a commercial corporation, which was the reason that the appeals court cited in declining to block enforcement of the subpoena.

Who is it ? Some observers have guessed as follows;

(1) Malta's seized Pilatus Bank, now in the custody of the government of Malta.
(2) A corporation, located in a tax haven jurisdiction, that has refused to disclose beneficial ownership information. Malta ? Cyprus, Antigua or Dominica ?
(3) A Russian government-owned bank. Connections through Kushner ?
(4) A corporate entity in Turkey that is linked to Russia, through Reza Zarrab.

Some Supreme Court experts have stated that the Court will not accept any case where the identity of the petitioner is not revealed, based upon the Court's history. If disclosure does occur, we will update our readers forthwith.