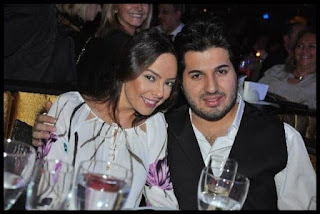 Turkish media has reported that Ebru Gundes, the wife of Iran oil sanctions evader Reza Zarrab, has moved to the United States, together with the couple's daughter. She is said to be staying in America for the next six months. This news appears to confirm that Zarrab, who has been released from custody, and is living in New York under an unusual arrangement, while he cooperates with US law enforcement, has expanded his role of assisting in matters involving Iran.

It is also important to point out that Zarrab has been talking to the Office of Special Prosecutor, headed by Robert Mueller, although the exact nature of his cooperation with that office is not known. Zarrab is known to have moved Iranian oil profits to Russia, but there has not been any indication that he had any contact with the Trump Presidential Campaign, Russian military intelligence hackers who broke into American email accounts, or any other facet of the Russia investigation.
Posted by Kenneth Rijock at Wednesday, December 12, 2018