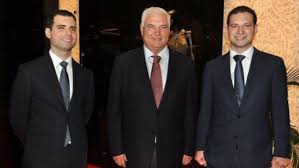 A court hearing on the US Government's move to deport the two adult sons of ex-Panamanian president Rtcardo Martinelli, Ricardo and Luis, was held today at the remote Krome Detention Center, which sits on the edge of the Everglades. The fact that the hearing was held at 7:30 AM, at a facility admission to which media access was barred, strongly suggests that the US Government, or the parties themselves, doe not wish the hearing to be covered by the press, for some reason. They are being represented by Ira Kurzban, a well-known Miami immigration attorney.

Their father's extradition case, which also took place in US District Court in Miami, was distinguished by the unusual fact that neither the media, nor the public was allowed access to the pleadings (court filings in the case) , though no issues of National Security or classified information were ever mentioned as the reason for the virtual sealing of the documents, which is extraordinary in an extradition case. Some legal observers thought that the reason may have been details of Martinelli's relationship with US President Donald Trump, which could have the potential of embarrassing the President, but this has never been verified.

The Martinelli sons do not appear to have any criminal charges pending against them in the Republic of Panama. There are allegations that they were the direct recipients of over $40m in bribes and kickbacks intended for their father, for his granting of approval of major government contracts in Panama. One theory is that the authorities in Panama intend to use the detention of the sons to obtain a guilty plea out of their father, who faces a potential life sentence for conducting illegal surveillance upon Panamanians, and for corruption.

The results of the hearing, if there were any decisions entered by the Immigration Court, have not been released, though it is believed that a deportation order was not entered. The Martinelli sons have a right of appeal, should there eventually be an adverse decision, as is anticipated, but such appeals are handled on a much more accelerated basis than other appellate proceedings.
Posted by Kenneth Rijock at Tuesday, December 04, 2018