OPPOSITION PARTY IN DOMINICA CALLS FOR REGIONAL LEADERS TO INTERVENE 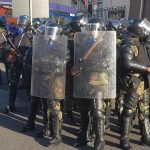 A leader of the Opposition Freedom Party has requested that regional and international leaders  intervene in Dominica, to avert potential bloodshed and loss of life, due to the government's regular use of its paramilitary police, the Special Services Unit, or SSU. This organization, which bears assault rifles, wears full combat gear, and arrives via armored vehicles, is now routinely deployed whenever any peaceful protest of any type forms, even though it may be a small group. 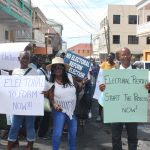 The SSU, which typically acts in a very aggressive manner towards unarmed civilians civilians who are peacefully demonstrating against the practices of Dominica's current government, represents a clear and present danger to the public safety. The SSU persists in harassing political protestors; its primary role is supposed to be the interdiction of crime, especially narcotics trafficking, and transshipment of drugs through the island, but it is being turned out every time a small group forms to protest the policies of the government. It is feared that the uncontrolled use of the SSU, which recently fired tear gas at protestors, will eventually result in their use of firearms against the unarmed civilian population. 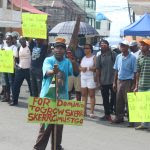 While East Caribbean leaders are not known to interfere in the internal domestic affairs of other states, the unstable political situation, due to the protest movement, dictates that outside intervention may be necessary to prevent loss of life.
Posted by Kenneth Rijock at Monday, December 17, 2018