MARTINELLI'S SONS GET $1m BOND IN THEIR MIAMI DEPORTATION CASE 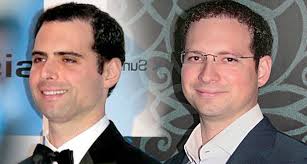 Panamanian sources report that Ricardo Alberto and Luis Enrique Martinelli, the sons of former Panamanian president Ricardo Martinelli, who are both subject to deportation proceedings, have been given bond in the amount of one million dollars each. The immigration judge at yesterday's hearing, which was closed to the press at the request of one of the parties, failed to reach a decision on deportation, and set the matter for further hearing on December 27, 2018 also at the remote Krome Detention Center, where the brothers are being held.

The granting of bond will certainly generate controversy, as Miami news services have reported that the brothers' yacht, which was docked on a canal behind the luxury residence where they are staying, was found fully stocked for a fast getaway.
Posted by Kenneth Rijock at Wednesday, December 05, 2018