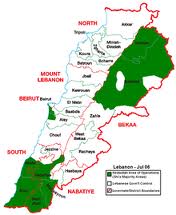 Lebanon continues to be a high-risk jurisdiction, where external and internal factors that are destabilising the country threaten to explode in widespread violence, crippling  the country's financial centre in Beirut, and raising Country Risk to unacceptable levels for an extended period of time.

(1) Sectarian tensions in Lebanon, due to spillover from the civil war in adjacent Syria, have now resulted in pitched battles in the city of Tripoli, leaving dead and wounded in the streets.

(2) Israel's pledge, to wreak havoc upon all of Lebanon, not just the Shiite South, in the event that Hezbollah precipitates another war, hovers ominously over Beirut's financial district.

(3) Hezbollah's disclosure this week, that its long-range missiles are hidden in mountainous areas of the country, and far from the frontier with Israel,  means that any future Israeli bombardment of known and suspected Hezbollah rocket sites could affect heretofore untouched parts of Lebanon, with additional loss of life.

If your bank clients are heavily invested in Lebanon, or have pending international trade receivables, or if your bank has substantial financial exposure in Lebanon, you may want to reduce exposure, close accounts, call loans, check on existing Letters of Credit, and any other outstanding matter that would be a loss if the conditions in Lebanon deteriorate into chaos. In my humble opinion: raise Country Risk, again.
Posted by Kenneth Rijock at Wednesday, December 05, 2012