The question has arisen: where are the nearly one million CAD $1000 notes that remain in circulation in Canada ? A dozen years ago, Canada abandoned the thousand dollar note, which can be extremely useful to laundrymen, for it greatly reduces the number of notes one must carry in conducting bulk cash smuggling, which thus reduces the risk of discovery.

So, who has all those high-value notes ? Are they part of some organisation's underground drug economy ? Still legal tender (currency of the realm), they can be deposited in any Canadian bank for credit, but they are then turned in, removed from circulation, and ultimately destroyed, so they're not going into the banks. 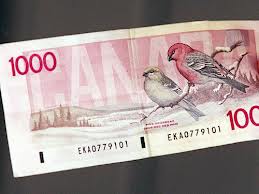 There have been rumours of sightings of large numbers of these notes in certain safe deposit boxes, in connection with corruption investigations, but nothing solid has surfaced. One wonders just how may have fallen into the hands of enterprising money launderers, not for storage in a vault, but as part and parcel of transfers of large sums. If I was still a money launderer, and I operated in Canada, I might very well bundle up a large number of these notes, and find  a way to use them to facilitate the nagging   problem of converting US Dollars held by my marijuana trafficking clients, or buying real estate "off the books.' or for some other unlawful purpose.


Bottom line, if any bank client ever shows up with more than one of these $1000 notes, it is time to conduct Enhanced Due Diligence upon him, his business, his known relatives ( if they are customers of your bank) and his business partners. That money is in hiding for a reason. 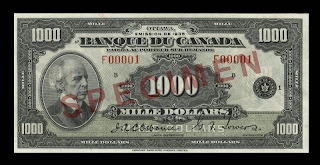