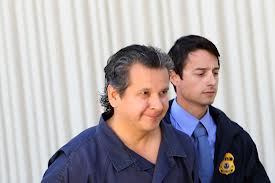 Marco Antonio Delgado, the prominent El Paso attorney charged* with laundering drug profits of a Mexican cartel, has, through his counsel, moved to revoke his Order of Detention, and filed a Notice of Appeal from the ruling of the United States Magistrate ordering pretrial detention. The case is unusual, for it has been alleged that Delgado was a Cooperating Individual (CI) who strayed into unauthorised criminal activity, whilst he was working with US law enforcement**.

Delgado's lawyer, in his extensive motion, stated that his client did not have access to a large amount of money, that he had no extensive international contacts, and that he was charged with a non-violent offence, and neither a flight risk nor a danger to the community. He is a naturalised US citizen, but has lived in El Paso for an extended period time, engaged in the the practise of law.

The US Attorney's Office, in its response, stated that he had considerable ties to Mexico,  that there were no combination of conditions that would assure his attendance at trial, and that he had once told an associate that he would flee to, and live in, the Turks & Caicos Islands, where he had a connection with a local law firm, which was reportedly engaged in assisting him with laundering. Details of his alleged money laundering activities appear in the government's reply.