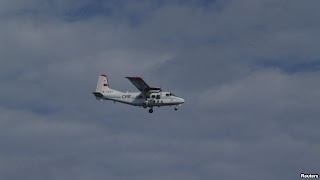 A Chinese Oceanic Administration aircraft overflew the disputed Senkaku Islands, and Japan scrambled eight F-15 fighters in response.  Additionally, a Japanese E2-C Hawkeye observation aircraft was also sent to the area. This aircraft is generally used as for AWACS duty, meaning airborne warning and control. Japan's military reaction to an unarmed,  light twin, of the Chinese government, may serve to increase the risk of a shooting incident in the area, which would seriously raise Country Risk for both countries.


The Senkakus, which are occupied by Japan, but are claimed by China, have caused relations to deteriorate between the two countries, and it  ha affected the sale of Japanese products in China. Additional incidents could inflame the Chinese public further, and since China is a major consumer of Japanese products, there could be economic consequences. We shall continue to monitor the situation for Country Risk purposes, as the entire region, including Taiwan and the Republic of Korea, could be affected if military force is employed.
Posted by Kenneth Rijock at Thursday, December 13, 2012