DID MALTA'S PRIME MINISTER AID THE RUSSIANS IN THEIR INTERFERENCE WTH THE 2016 US PRESIDENTIAL ELECTIONS ? 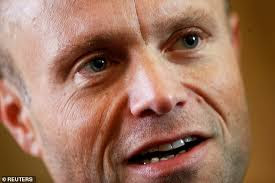 As we have been reviewing the findings of fact contained in the Mueller Report, regarding the role of the Maltese academic Joseph Mifsud, now missing in action, and factoring in both his close relationship with former Prime minister Joseph Muscat in 2016, when the Russian intelligence services were actively interfering, in a number of ways, with the US Presidential campaign and election, and the fact that pending investigative matters were redacted, we ask aloud what involvement did then-PM Muscat play in the Russian scheme to destroy Hillary Clinton, and elect Trump. Des his name appear in the classified version of the Report ?

Muscat, known to his detractors as a "Champagne Socialist," meaning a politician espousing Socialist views, but quietly (and covertly) accumulating personal substantial wealth, through corrupt means, all the while publicly subscribing to an agenda that devotes all resources to the greater good, opposed Malta's Membeship in the European Union, though he later took a lucrative EU position in Brussels. His Labour Party, since the time of its early leader Dom Mintoff, followed the official Neutrality stance in the Cold War, while maintaining close relationships with the Communist dictatorships in the East. Muscat has shown that his perspective is not Pro-West; he has been involved in dodgy matters with Russia to line his pockets, and add to his offshore wealth.

The number of Russian nationals who hold Malta's IIM (Citizenship by Investment) passports is believed to be substantial; Russian account holders at the now-closed Pilatus Bank, where they maintained substantial deposits, are known to have been in close contact with Joseph Muscat; their role in Malta  remains unknown.

Was Muscat paid by Russia to assist Mifsud, as well as Russian intelligence agents inside Malta ? A new investigation, which began in late January, continues to probe the extent of Muscat's role in Mifsud's efforts to deliver information from Russian sources to the 2016 Trump Campaign. We will be following this matter as it unfolds, and report back to our readers.