The District Judge in the massive PDVSA billion dollar money Miami money laundering case has unsealed a previously-granted Rule 35 Motion, granting Swiss money launderer Matthias Krull a Sentence Reduction from ten years to only three and one-half years. A reduction in excess of 50% is rarely given; in this case the Court noted the "nature and extent of Defendant's cooperation, " which was obviously major.

Given that such favourable treatment only comes after the cooperator renders what is known as Substantial Assistance, which means he helped secure indictments and/or the recovery of a substantial amount of criminal proceeds, you can be sure it was something greatly appreciated by the Department of Justice. Given that we are aware of the pending Miami case, a probable sealed indictment in SDNY, and a possible additional sealed indictment in the District of Columbia, the two groups of known targets, the Miami laundrymen not yet charged, and the Malta laundrymen who moved $130m, those two groups should now consider that some of them may very well have sealed indictments pending against them.

The Sealed Order granting Motion for Reduction of Sentence appears below for your review. It was unsealed yesterday, according to the court docket. Certain criminal defence attorneys in the US are most likely contacting their clients with this bad news. We shall immediately advise our readers when any indictments are unsealed and become public record. 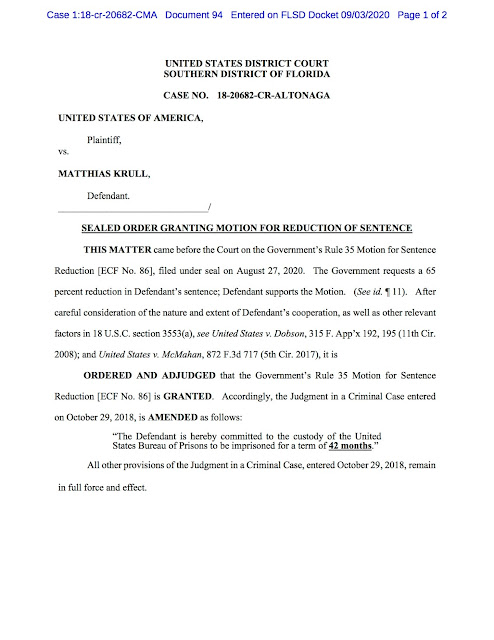