MALTA'S WHISTLEBLOWER COMMENTS ON THE IMPACT OF THE KEITH SCHEMBRI ARRESTS

"Give up the reins, already !"  by COSIMO

Given the importance of the arrests yesterday, of Keith Schembri and ten others, in a case involving corruption, money laundering, fraud and CBI passport sales kickbacks, we have asked Maria Efimova, The former Pilatus Bank staff member, and Malta's best known whistleblower, for her thoughts and comments on the events of the day, and their impact upon Malta.

As is our practice, our quotes are verbatim, without editing, so that our readers understand her unique perspective:

1. On the arrests, " I am sure that the accused will start talking very soon. I sincerely hope there will be no more murders. Brian Tonna and Karl Cini were charged with lying under oath and falsifying documents. I guess they committed the same crime in the Egrant inquiry also."

2. Regarding the extensive delays in the investigation, "It took almost four years for Hillman  & Schembri inquiry to be concluded, while the egrant one was done in one year. Pure set up. "

3. On Pilatus Bank, " Interesting detail. Schembri used Pilatus Bank for his illegal transactions. However no director of Pilatus has been charged. I think they are the untouchable ones, too. I bet Mr. Tonna is mad about it."

4. Discussing the probable outcome of the case, " Not all of them will end up in jail. I guess they will find a way to blame everything on one or two of them, on the less "valuable" ones. That is why the less "valuable" should start talking and revealing - to save themselves."

5. On why this case now, instead of charging new defendants in Daphne's murder or in the major money laundering cases, "They opted for the smallest evil." 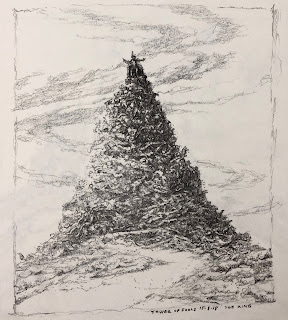 Keith "I'm the King of the World" Schembri  by COSIMO

6. About Muscat's subsequent statements, "have you read that Muscat immediately started talking about the Egrant inquiry ? This guy is scared his set-up will fall apart."

7.  Regarding the news about the extradition order upon the Colombian money launderer Alex Saab Moran, who moved $130m through Pilatus Bank, using Elemento Ltd., "Wow! I didn't know that. Muscat definitely blessed those transactions."

8. On the impact of the arrests upon the political situation, " Normally, they should call an election now."

9. Discussing whether Michele Muscat's reputed money laundering through a fashion house exposes her to indictment abroad, " Oh yeah, this lady is in business, too." " She used

10. Finally, on PM Robert Abela, "I think Robert Abela secretly wishes to resign. He looks terrified. " on Abela's prior role as Joseph Muscat's legal advisor,  Not that good of an adviser, as we can see. "

We shall continue to keep our readers advised in the Schembri matter.