HELLHOUNDS ON HIS TAIL, MALTA'S RUNNING MAN IS ADVISED TO MAKE A DEAL TO SAVE HIS SOUL 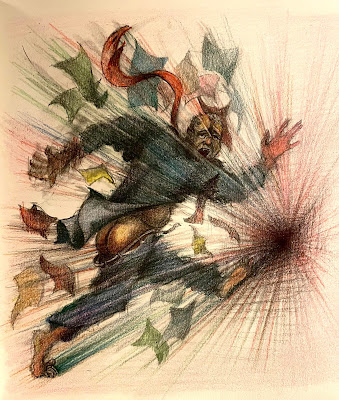 The Running Man by COSIMO

Sources inside the Republic of Malta have reported that former Prime Minister Joseph Muscat has been advised by one of his attorneys to strongly consider cooperating with American law enforcement authorities, to mitigate his ultimate sentence for money laundering and Foreign Corrupt Practices Act violations It is not known whether the advice came from an American or Maltese criminal defence attorney, and whether he has agreed to follow it.

Muscat could, if convicted, be sentenced to a long term in an American prison that would insure that he would never be released during his lifetime, making a decision Hobson's Choice, which is no choice at all. His counsel has certainly been made aware of the Leroy King case, where the United States tenaciously pursued the former Antigua government financial regulatory agency leader until it achieved extradition, and subsequently he was sentenced to to ten years in Federal Prison. That is but one example that Muscat must note when considering mounting a defence to criminal charges that will most certainly be filed in the near future.

Of course, should he take his attorney's advice, a large number of his associates, as well as his criminal assets, will be sacrificed, so that their leader will end up with a short sentence, served in a low security  facility. Will he become a pariah, hated by most of his co-conspirators ? Or go to prison, never to return ? As we said, thee are the hardest choices a person may ever have to make. We trust he chooses well.