As we recently reported  on March 9, 2021, in  Caribbean Appellate Court holds that Magistrate can Summon Dominica's Officials on Treating Charges,  the corrupt senior leadership in the Commonwealth of Dominica may end up liable on Treating charges. Criminal complaints filed as private prosecutions were ruled appropriate, and the Magistrate ordered to proceed on his fact-finding mission. Were illegal payments made to obtain votes ? It's been going on for  twenty years in Dominica.

Dominica's leaders, obviously very unhappy with the results, had Lennox Lawrence , known to be one of the attorneys representing Prime Minister Roosevelt Skerrit, and others, sent a letter, on March 24th, to Sherma Dalrymple, the Director of Public Prosecutions, seeking to quash the case. Attorney Lawrence, in a 12-page argument, with profuse legal citations, is attempting to obtain intervention of the Director, and the Attorney General, to kill the case. It shows you to what lengths Dominica's sleazy officials, caught violating their own laws about paying for votes, will stoop to escape justice. 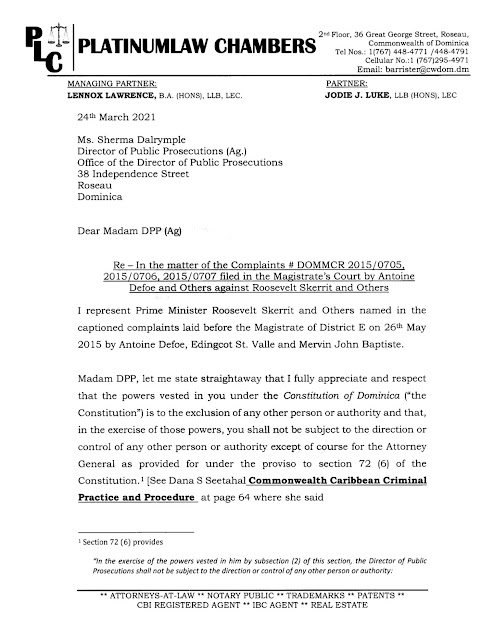