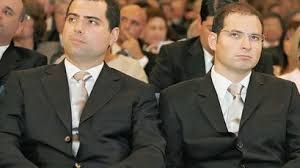 If you were wondering why there was no order of extradition handed down last Friday, regarding the United States' efforts to arrest the two sons of Panama's former president, Ricardo Martinelli, who face charges of accepting multi-million dollar bribes from the Brazilian construction giant Odebrecht, their attorneys were able to delay matters.

Guatemala counsel for the Martinelli sons moved to have the Court recuse (disqualify) itself, which triggers appellate action. Is this a cheap, purely dilatory move ? Is there not any other conclusion to arrive at The evidence against their clients is most likely very powerful; remember, Odebrecht has already settled with the United States, and you can be assured that a bulletproof case awaits the Martinelli brothers in a American courtroom. No wonder their father sought to break them out of prison, and spirit them to Panama, where they would be immune from American legal action.

Let justice now be served; the Martinellis need to face their accusers, and let a jury decide.