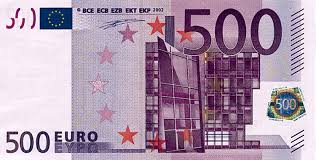 At long last, the countries of the European Union will greet the New Year by doing the right thing, for anti-money laundering purposes; it will finally stop printing the bulk cash smuggler's most effective tool, the five hundred Euro banknote. On January 27, 2019, all of Europe's central banks, save two, will cease printing the €500 note, and the two holdouts, Germany and Austria, will stop on April 26, according to reports. It will remain currency of the realm (legal tender) indefinitely, but will no longer be printed, like the USD$500, which was last printed in 1945.

Two years ago, the European Central Bank advised that it intended to halt the widespread abuse, by criminal elements, of the €500 note by the end of 2018, due to concerns that it facilitated illegal activities. That is an understatement; the high-value currency allowed money launderers engaged in bulk cash smuggling to move a million dollars in the post, without even having to place extra postage on the envelope. I actually demonstrated this technique two decades ago, before Congress.

Back in 1999 and 2000, your blogger testified about the potential for abuse of the €500 denomination, before three committees of the US Congress, long before it was even issued, and showed how easy it made illicit international transfer of the proceeds of crime. Only the Guardian found my prediction important enough to cover at the time. You can find my testimony archived in the Congressional Record.

A survey found that a huge percentage of the five hundreds were in Spain, in the hands of Russian organized crime syndicates, but still Europe continued to print the note, notwithstanding that it has no real utility in modern financial commerce, which increasingly relies upon non-cash transactions, such as Internet banking and online payment systems. The €100 note is more than sufficient for public use, in my humble opinion.

It joins the high-value notes of the US and Canada in the dustbin of history; now if only the EU can bring pressure upon the Government of Switzerland to stop printing that pesky 1000SFr (CHF1000) note, we might be able to finally take a bite out of bulk cash smuggling in Europe. I do not care that the Swiss culturally prefer cash for many of what we consider to be purely private transactions; I do care that one can actually still draw out those high value notes from an ATM.

Perhaps if compliance officers at banks in the EU target anyone who deposits 1000SFr notes as a potential money launderer and thereby stigmatizes the denomination as high-risk, it will prevent bulk cash smugglers from moving to that form of illicit value for convenient and efficient transport of criminal proceeds. Let's leave the Swiss high value note where it belongs, please in the capable hands of residents of Switzerland, Liechtenstein, and the Italian exclave of Campione.