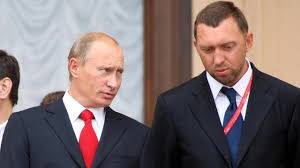 The United States Senate today voted to advance a resolution which would block the US Treasury Department from lifting sanctions on three Russian corporations connected to sanctioned Russian businessman Oleg Deripaska. By a 57 to 42 vote, the Senators have moved the matter forward; a 3/5 majority, or 60 votes, will be required to move the resolution to a final floor vote. Eleven Republicans, who generally vote lockstep with President Trump, voted in favor of advancing the resolution.

Reducing Deripaska's ownership to less than 45% will certainly not change his influence upon Russhal, notwithstanding Secretary Mnuchin's claims that a minority share will magically and immediately change control of the company. Many believe this is just one more concession made to Russia on the orders of President Trump, and that Treasury's claims are totally without any basis in fact, and bogus.

Given Deripaska's known connection with Russian efforts to influence the 2016 Presidential Election, Treasury's proposed lifting of sanctions, which reportedly comes as the result of Deripaska's efforts, is seen as pandering to special interests, and not in the best interests of the United States.