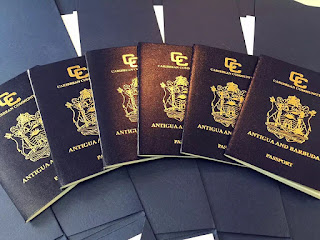 We have previously detailed Antigua's sordid tale of 200 blank Citizenship by Investment (CBI) passports, assigned to a seedy Chinese billionaire, but not delivered, after he was kidnapped in Hong Kong and taken into the People's Republic by security agents. Though intended for successful CBI applicants from China, those bank passports were soon stolen by a ring of professional criminals who are familiar to all Antiguans, as they constitute the same corrupt law enforcement and government figures, and their close associates, who sell CBI passports to dodgy criminal elements. Our prior article was titled What did the Antigua Government know and when did it know it ?

When the most senior police official in Antigua was named, and others on the force implicated, most Antiguans thought the scope of the scandal had been exposed; they were dead wrong. This week, a local attorney, cooperating with both US and Antiguan authorities, revealed that additional conspirators were involved in the scandal, and they are the most senior three officials, short of the Prime Minister himself, in government. When their names appear on criminal charges, the government may fall, especially if any of them end up in a courtroom in the United States, facing swift justice.

Just when you thought that systemic Caribbean corruption, involving the lucrative sale of CBI passports to career criminals, couldn't get any worse, it does. The most senior law enforcement officials in Antigua can hardly indict themselves, so the case will most likely end up in a Federal courtroom in the America, especially since payments for prized CBI passports are always made in US dollars.
Posted by Kenneth Rijock at Tuesday, January 08, 2019