Greenberg Traurig LLP, one of the most powerful law firms in the United States, and which formerly represented Ponzi schemer R Allen Stanford and Stanford International Bank, has asserted in a Texas Federal case that it has no legal liability to Stanford investors for their losses. It has filed a Motion for Judgment on the Pleadings*, directed to the remaining allegation, that Greenberg aided and abetted Stanford in the breach of a fiduciary duty owed to clients of his offshore bank, or were knowing participants in the Ponzi scheme.

The law firm, which has been a defendant since 2012, in a lawsuit filed by the court-appointed Receiver in the Stanford Bank case, has recently challenged the sole remaining count pending against it, and supported its position with recent case law that holds, under Texas law**, there is no cause of action for Aiding and Abetting a breach of Fiduciary Duty, citing  a 2017 Supreme Court of Texas, decision, and a 2018 case in the Fifth Circuit Court of Appeals. The case law, which appears to be relevant and dispositive of the issue, appears in a memorandum of law filed by the law firm.

The master Ponzi schemer, Allen Stanford, is currently serving a 110-year sentence at the United States Penitentiary Coleman II, and his release date is April 17, 2105.

Readers who are interested in the case law cited in the Memorandum, see pages 1 and 2 below. 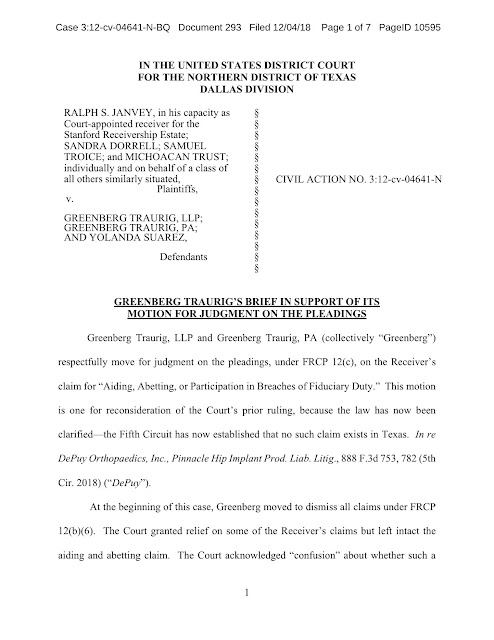 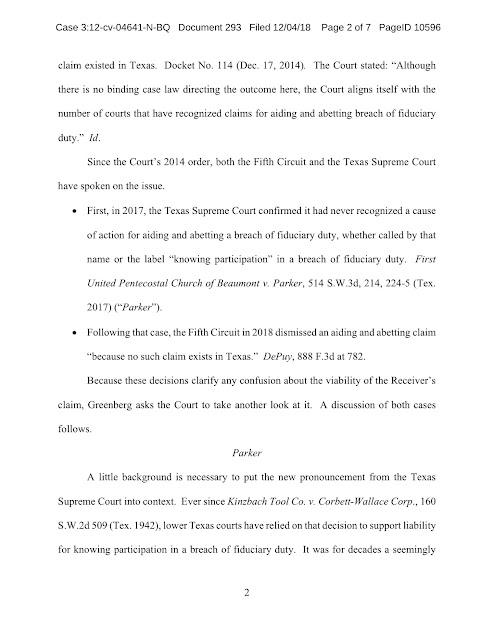