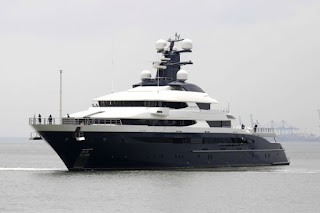 It seems that Malaysia is having a lot of trouble finding a buyer willing to pay a fair price for 1MDB fugitive fraudster Jho Low's $130m mega-yacht. The vessel, which is reportedly docket at a Malaysian Navy facility near Kuala Lumpur, has only drawn substandard bids. Malaysia is said to be paying the equivalent of over $750,00 per month to maintain the the luxury yacht.

Jho, who was last seen in Hong Kong and Macao, and is a fugitive from justice, regarding the billion dollar 1MDB scandal, is believed to have transited China, and may be seeking refuge in St Kitts & Nevis, where he hold CBI citizenship, and where he would be immune from extradition; St Kitts has become a safe haven for some financial criminals who have secured SKN passports through the country's Citizenship by Investment program. Jho is regarded by some as the poster boy for all that is wrong with East Caribbean CBI programs, where known criminals purchase passports for cash, and the compliance process is a total sham, even though the programs allege that they conduct due diligence upon applicants.

Notwithstanding Jho's celebrity history, which we have extensively reported on this blog, the latest news is that he has disappeared from public view, after being seen in Hong Kong. Whether he ever makes it to St. Kitts, in his flight to avoid prosecution, remains a question.
Posted by Kenneth Rijock at Friday, January 18, 2019