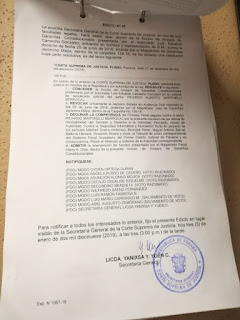 The Supreme Court of Justice, the highest court in the Republic of Panama, has issued a ruling that appears to declare that it has no jurisdiction to hear the case against the country's former president, Ricardo Martinelli, on the four criminal charges that he was extradited for from the United States. The ruling, which took the form of an Edict, relies upon "Constitutional Guarantees" to support it. The former president is currently in custody and facing trial in a lower court.

When Ricardo Martinelli left office, he immediately fled to a neighboring Central American country, where he was reportedly sworn in as a Member of the Central American Parliament (Parlacen), and his attorneys have asserted that this act gave him immunity from prosecution.

The Edict provides for the right of appeal by any interested party within five days. Rumors have been swirling around Panama City since Martinelli's extradition, declaring that rampant corruption in the country's court system will result in a dismissal of the charges against him, and that the case will never go to trial. Many of the judges on the Supreme Court of Justice (CSJ) owe their appointments to Martinelli, and he used his influence many time in the past to pervert the process of justice while he was president. Whether he will walk out of prison without being held accountable for his crimes is a real possibility, but this ruling does not fully put to rest fears that he will cheat justice.
Posted by Kenneth Rijock at Friday, January 04, 2019