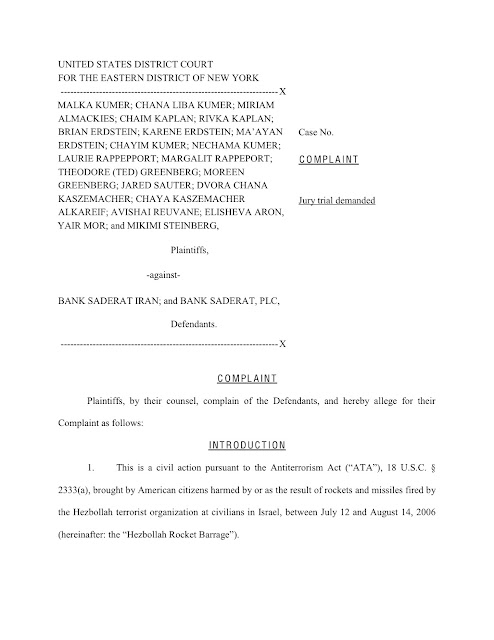 A new civil suit, recently filed in the US District Court for the Eastern District of New York, where many terrorism suits have been previously brought, seeks $50m from Iran's government-owned Bank Saderat Iran, and its UK subsidiary, Bank Saderat PLC, for injuries and damages arising out of Hezbollah rocket and missile attacks upon American citizens.

The Complaint details* Iran's extensive use of Hezbollah as its agent and proxy, in its 40-year terrorist campaign against the United States and Israel, and documents how Bank Saderat was employed by Iran to act as the paymaster to Hezbollah, to fund and finance all its terrorist activities, with special attention to $50m, which was paid out through the bank's Beirut branch. Some or all of that $50m was processed through the Eurodollar market, and passed through the American financial structure.

What is most striking of all the allegations contained within the 36-page Complaint is the sordid list of the major European financial institutions that provided USD payment processing services for Iranian transactions, and the subsequent US regulatory or legal action against them that they agreed to: