WHAT IS THIS CELEBRITY-OBSESSED PSEUDO-DIPLOMAT FROM DOMINICA, FRIEND OF DONALD TRUMP, DOING AT THE UNITED NATIONS ?

By far the strangest story to emerge from the Caribbean's "play for-pay" diplomatic passport sales programs, where foreign nationals acquire a diplomatic passport, is the tale of an Italian businessman from New York, Paolo Zampoli. According to reliance sources in the Commonwealth of Dominica, in 2011 Zampoli approached Vince Henderson, the UN Ambassador, and offered to pay $250,000, in cash, for a diplomatic appointment, and passport.

At the same time, Zamboli also approached the UN Ambassador from Grenada, with a similar request, which was reportedly declined, but reports show his subsequent appointment, ion August, 2012, as Grenada's Minister of Tourism, and his wife, Amanda also appointed to a diplomatic post in Grenada.

Over the reported objections of his advisors, Dominica PM Roosevelt Skerrit, who traveled to New York in March 2011, met Zampoli, who introduced him at that time to his close friend, President Donald Trump. Zampoli, who had owned a New York modeling agency, claims that he made the initial introduction between Trump and his current wife, the First Lady, Milania.  Zampoli has continued his close ties to the Trumps, appearing at the Mar-A-Lago resort with the Trump family, since his election.

PM Skerrit appointed Zampoli  to the diplomatic rank of Minister Counsellor for Dominica, and named him as Ambassador Henderson's deputy, in the UN Mission of Dominica, as of November, 2011. In October, 2013, Zampoli was additionally appointed Ambassador for Oceans and Seas, which appears to be basically a symbolic position, with little, if any, actual duties and responsibilities. Dominicans say that Zampoli has never visited the country he purportedly represents as a diplomat.

Zampoli, since his ambassadorial appointment, has been a fixture at the United Nations; the Internet is full of photographs of him with some of the world's most influential diplomats and statesmen. What he actually does at the UN is another story, other than mix and mingle. Some observers believe his primary goal is to cultivate relationships with powerful international leaders, but on whose behalf is not known, as Dominica's role at the United Nations is small, though its current government is closely aligned with China, Venezuela and Cuba. His end game remains a mystery; Why is he trying to win friends and influence people ?
What we are seeing is most likely a celebrity-obsessed businessman, who bought his way into the private halls of the United Nations, with a diplomatic passport from Dominica,  which allowed him to participate in the deliberations of that august body. As long as individuals can purchase diplomatic status, through programs that violate the Vienna Convention on Diplomatic Relations, these abuses will continue. We do wonder, who got the $250,000 ? It certainly did not end up in the National Treasury of the Commonwealth of Dominica. 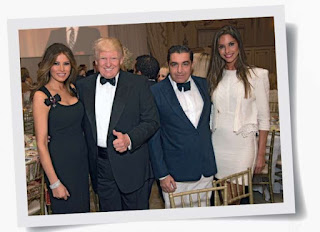