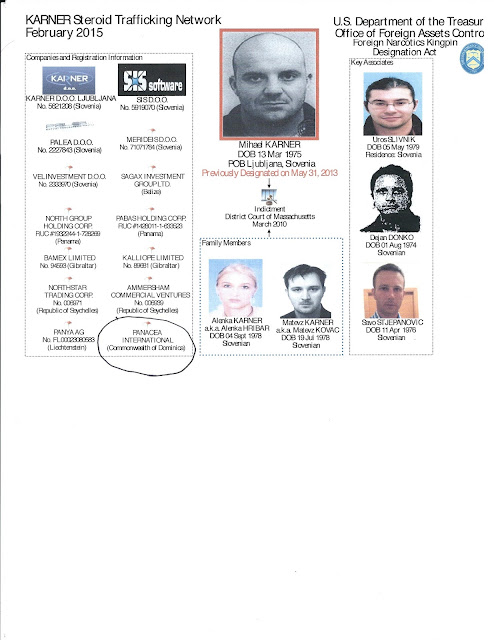 What you are looking at above is an OFAC chart, published by the US Treasury, of the Karner drug trafficking network. Note that one of the entities involved in the money laundering of narcoprofits, and therefore sanctioned by the Office of Foreign Assets Control, is Panacea International, an offshore corporation in the Commonwealth of Dominica. For those readers who were not aware that Dominica harbors companies on the OFAC list, this is one of them which was pointed out to me recently.

Panacea International Ltd.  is registered as an offshore company by Offshore Companies House Ltd., whose services are, in reality, provided by CCP, of Copthall,  which is reportedly under Russian ownership. In truth and in fact, the individuals answering the OCH number admit that it is connected to CCP. Who says Dominica is not a dodgy tax haven, providing a safe harbor for the usual suspects ?

The Karner network moves drugs into, and through, Malaysia, and it requires the services of a number of offshore financial centers to aid and assist in laundering its profits. Alireza Monfared, who resided in Malaysia, where he was illegally selling sanctioned Iranian oil, as well as committing a number of other financial crimes there, was probably the only "Malaysian" with a Dominican diplomatic passport, which allowed him inspection-free transit, through international airports. Remember, when he relocated to Dominica, he arrived with massive amounts of baggage; cash or monetary instruments, most likely.

Monfared has become my primary suspect, as a facilitator of the movement of Malaysian drug cash, into Dominica. He spent a lot of time in Labuan, Malaysia's offshore financial center, where the high balances that he banked, in connection with the illicit Iranian oil sales, probably gave him the ability to move the proceeds of drug crime abroad.

With Monfared extradited, and facing the death penalty in Iran, we may never know the full extent of his involvement in money laundering, but perhaps some patriotic citizen in Dominica might want to fill in the blanks, in public.