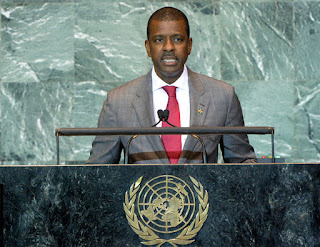 If you read my recent article entitled  Dominica's Application for a Diplomatic Passport: an Insult to International Diplomacy, and reviewed the attached application form, you know that all applicants must specify precisely how, and when, and upon what grounds, that they acquired Dominican citizenship. It is a Condition Precedent to obtaining that prized diplomatic passport, meaning that it must be achieved first.

The trouble with Diezani Alison-Madueke, the former Nigerian Petroleum Minister, is that she did NOT have Dominican citizenship, when she bought her diplomatic document from Prime Minister Roosevelt Skerrit, which makes here ineligible to serve in any diplomatic capacity, or even to be issued such a document.

Dominica's Ambassador to the United Nations, Vince Henderson*, admitted Diezani's non-citizen status
" When asked if Diezani is still a citizen of the island, Henderson replied,
' Alison-Madueke was never a Dominican citizen in the first place. Diplomatic
passports do not come with citizenship'."